(MINNEAPOLIS, MN, 11/22/2016) - The Minnesota chapter of the Council on American-Islamic Relations (CAIR-MN) today called for increased protection of Muslim students in that state's schools following an incident in which an Afton Lakeland Elementary School 5th grade student allegedly brought an air pistol to school after he threatened to shoot a Somali-American Muslim 3rd grade student.

Parents of the student reported to CAIR-MN that on Friday, November 11, the 5th grader threatened to shoot the Muslim student. On Monday, November 14, the same 5th grader reportedly brought an air pistol to school. The school bus driver confiscated the air pistol and called the police.

"Thankfully, a major tragedy was averted by the quick action of the school bus driver," said CAIR-MN Executive Director Jaylani Hussein. "We are asking all school districts across the state to step up protection for Muslim and other minority students in the wake of this incident and because of the wave of racist and anti-Muslim incidents nationwide following the November 8 election."

Hussein added that an early response to bullying incidents can prevent further harm to students.

CAIR-MN is also looking into other recent incidents involving female Muslim students who were allegedly assaulted and had their religious head scarves (hijabs) pulled in Northdale Middle School and St Louis Park High School. Students in St Louis Park reported the incident occurred on November 11 and, to date, no actions have been brought against the student who allegedly committed the assault. School officials have stated there is no evidence of the assault, even after three eyewitnesses reported the incident.

(MINNEAPOLIS, MN, 11/15/2016) - The Minnesota chapter of the Council on American-Islamic Relations (CAIR-MN) today expressed concern about the lack of response by school officials in Coon Rapids, Minn., to an alleged assault on a Muslim middle schooler.

CAIR-MN says the family of the Northdale Middle School student reported that their child is feeling emotionally and physically distressed after she was allegedly assaulted on Friday by a classmate who came up behind her and violently pulled off her Islamic head scarf (hijab) and threw it on the ground. The classmate also pulled on her hair and let it come down in front of other students. The Muslim student now feels unsafe in the school and has yet to return to school.

School officials did not respond to the incident until Tuesday, despite the fact that the incident was reported immediately by the student and after being contacted by the family on Friday.

"School officials must take immediate actions to ensure that all students, regardless of their faith or ethnicity, are provided a safe learning environment," said CAIR-MN Executive Director Jaylani Hussein. "It should not take days to respond to an apparently bias-motivated assault on a student."

He said CAIR has noted a spike in incidents targeting American Muslims and other minority groups since the November 8 presidential election. 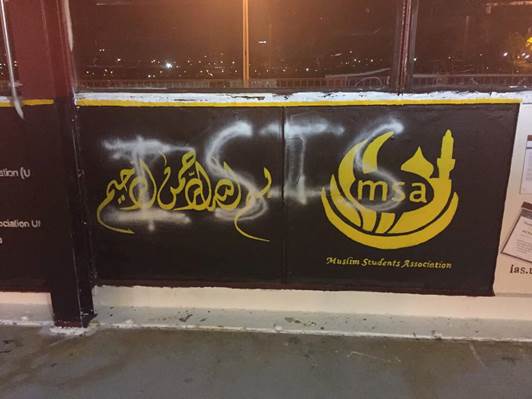 (MINNEAPOLIS, MN, 11/3/2016) - The Minnesota chapter of the Council on American-Islamic Relations (CAIR-MN) today called for a hate crime investigation of vandalism targeting Muslim students at the University of Minnesota.

CAIR-MN reports that vandals spray-painted "ISIS" on a sign put up on the Minneapolis, Minn., campus by that university's Muslim Student Association (MSA). The vandalism was discovered this morning.

"University administrators and state religious and political leaders must speak out forcefully against the rising anti-Muslim hate in our society that results in such disturbing incidents," said CAIR-MN Executive Director Jaylani Hussein. "We urge campus police and other relevant law enforcement agencies to investigate this incident as a hate crime."

He noted a recent spike in the number of hate incidents targeting Minnesota Muslims.

Feds Zero in on Rise in Anti-Muslim Hate Crimes in Minnesota, Nationally

Video Message to Community Post Election: We have your Back.

The Council on American-Islamic Relations (CAIR), the nation's largest Muslim civil rights and advocacy organization, today offered a $5,000 reward for information leading to the arrest and conviction of the perpetrator of a deadly attack on a Saudi Arabian student in Wisconsin.

CAIR said University of Wisconsin-Stout student Hussain Saeed Alnahdi, 24, died one day after being assaulted on a street in downtown Menomonie, Wis. The attacker, described as a white male about 6 feet tall, assaulted Alnahdi early Sunday morning near a pizza restaurant. Alnahdi was found unconscious and bleeding from his mouth and nose. He was hospitalized and later died from his injuries.

CAIR's Minnesota chapter (CAIR-MN) and its national civil rights department are both monitoring the case. CAIR-MN Executive Director Jaylani Hussein is meeting today with students and staff at the University of Wisconsin-Stout.

We have 80 guests and no members online