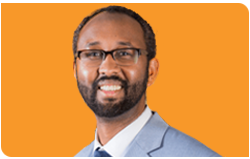 Hussein worked as the Community Liaison Officer at Metro State University and as a Planner for the Minnesota Department of Agriculture. He received conflict resolution training from Volunteers of America and worked with juvenile treatment centers. In 2013, he created Zeila Consultants to develop and offer cross-cultural training workshops on East African cultures.

Hussein has been active with various community organizations, including the Islamic Cultural Center of Minnesota Board of Directors, Wilder Foundation Advisory Board, Muslim Youth of Minnesota Advisory Board, Islamic Resource Group Speakers Bureau, and ARAHA Board of Directors. He has traveled to the Horn of Africa twice on behalf of ARAHA, to open a regional field office and oversee large-scale humanitarian projects during the Somali Famine of 2011.

“CAIR-MN has completed its founding phase,” said CAIR-MN Co-Founder & Outgoing Executive Director Lori Saroya, “We are certain that Jaylani’s excellent leadership skills, sincerity and passion for civil rights will help move CAIR-MN into its next stage.”

“CAIR-MN plays a vital role as the state’s leading civil rights organization for Muslims and other racial, religious, and ethnic minorities facing discrimination,” said CAIR-MN Board Chair Kausar Hussain. “We welcome Jaylani and are confident that his extensive experience will have an important and positive impact on the entire community.”

There has been a tremendous growth of CAIR-MN since its founding in 2007. Last year, CAIR-MN handled over 200 cases, including employment discrimination, school bullying and harassment, land use opposition, bias-motivated crimes, racial and religious profiling, and extra-judicial exile. CAIR-MN received the 2013 Difference Makers Award from the American Bar Association, was selected as a 2013 “Nonprofit to Know” by the Minnesota Philanthropy Partners, named the 2012 CAIR Chapter of the Year, received the 2011 Nonprofit Mission and Excellence Anti-Racism Award from the Minnesota Council of Nonprofits and MAP for Nonprofits, named a 2010 "Difference Maker" by the St. Cloud Times, and was featured in the Rochester Diversity Council "What Works."

We have 102 guests and no members online