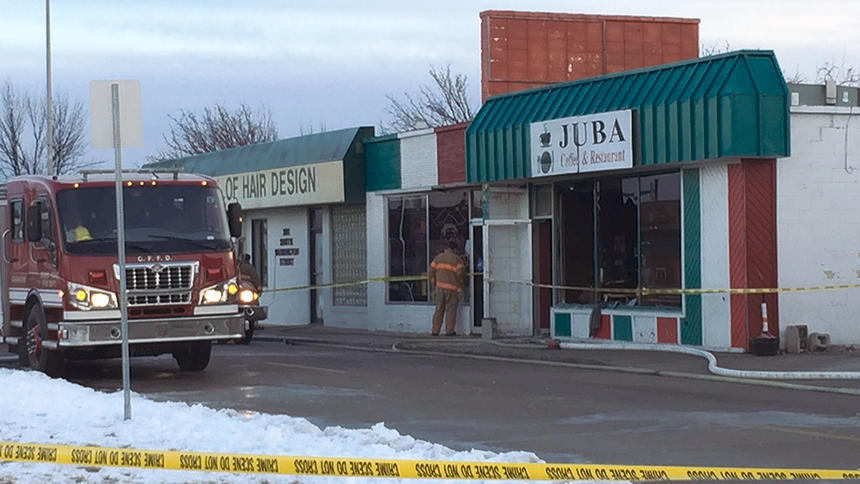 CAIR-MN Calls for Hate Crime Probe of Arson, Vandalism at North Dakota Muslim Restaurant  (MINNEAPOLIS, MN, 12/9/2015) - The Minnesota chapter of the Council on American-Islamic Relations (CAIR-MN) today called on the FBI to investigate arson and vandalism of the Juba Coffee House, a popular Somali restaurant in Grand Forks, N.D., as a hate crime.

The Grand Forks Fire Department responded to the fire early on December 8. Later in the day, The department said in a news release that the fire was "incendiary and suspicious in nature."

The Grand Forks Police Department also is investigating apparent vandalism that occurred overnight Thursday, when someone painted graffiti on the exterior wall of the building. The graffiti included what appears to be an SS in the style of a symbol for Nazi Germany's secret police above the painted words "go home."

"We call on federal authorities to investigate this attack as a hate crime and urge local law enforcement to increase patrols around mosques within their jurisdiction," said CAIR-MN Executive Director Jaylani Hussein. "The lives of American Muslims have been placed in danger by the rising anti-Muslim hysteria in our nation and by the inflammatory rhetoric used by a number of national public figures."

This incident fits a pattern of increased hate-motivated crimes and bias incidents nationwide targeting persons and property associated, or perceived to be associated, with Islam and the American Muslim community since the Paris attacks the San Bernardino killings and anti-Muslim rhetoric by public figures like Donald Trump.

CAIR: From a Severed Pig's Head to a Bullet-Riddled Koran, Attacks on Muslims are Rising (LA Times)http://www.latimes.com/nation/la-na-muslim-attacks-20151208-story.html
CAIR Reports Unprecedented Backlash Against American Muslims After Paris Attackshttp://www.cair.com/press-center/press-releases/13277-cair-reports-unprecedented-backlash-against-american-muslims-after-paris-attacks.html
CAIR: Muslim Sixth Grader Allegedly Attacked By Schoolmates Who Called Her ISIS, Tore At Her Hijabhttp://www.insideedition.com/headlines/13411-muslim-sixth-grader-allegedly-attacked-by-schoolmates-who-called-her-isis-tore-at-her-hijab

We have 91 guests and no members online