WHAT YOU NEED TO KNOW? MUSLIM BAN 3.0

WHAT YOU NEED TO KNOW? MUSLIM BAN 3.0

What you need to Know?

We are reviewing it to see how exactly it will be rolled out, but some general information based on what we know now is included below.

Please note that this information is subject to change based on the various legal challenges that may be advanced in court. Please check back frequently for the most up-to-date information.

Part of MB-3 went into effect on September 24th. The remainder will go into effect on October 18th, 2017. Much of the old order (Muslim Ban 2.0), signed on March 6, 2017, also partially expires today. The portions of Muslim Ban 2.0 impacting refugees specifically will continue until October 24, 2017. Despite this change, the temporary court order placing the old order on hold is still active, until the U.S. Supreme Court's hearing on October 10, 2017.

Who Will Be Impacted?

WHO IS NOT IMPACTED?

Lawful permanent residents (green card holders);Individuals admitted or paroled into the U.S. on or after the effective date of MB-3;

Those with a document other than a visa that allows them to travel to the U.S., if the document is dated on or after the effective date of MB-3;Dual-nationals traveling on a passport from a non-designated country;Individuals granted asylum;Refugees already admitted to the U.S.; orIndividuals granted withholding of removal, advance parole, or protection under the Convention against TortureUntil October 18, 2017, Citizens of Iran, Libya, Somalia, Syria, and Yemen are exempt from MB-3 if they have a "bona fide relationship" with a U.S. person or entity, meaning:A close family member living in the U.S.,An offer of employment in the U.S., and/orAn admission to study in the U.S. 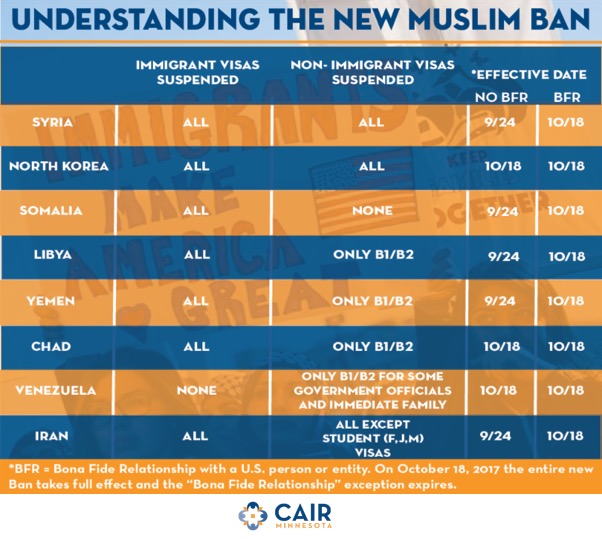 No changes were made in today's order that impact refugees.There continues to be a 120-day halt of the entire refugee program, which started on March 16, 2017.Refugees with a bona fide relationship to a U.S. person or entity are exempt from the ban.Currently, a formal assurance from a refugee resettlement agency is insufficient on its own to establish a bona fide relationship. This matter is under appeal.The number of refugees to be admitted to the U.S. for fiscal year 2017 is reduced to 50,000.

For Legal Questions Call our office

We have 77 guests and no members online